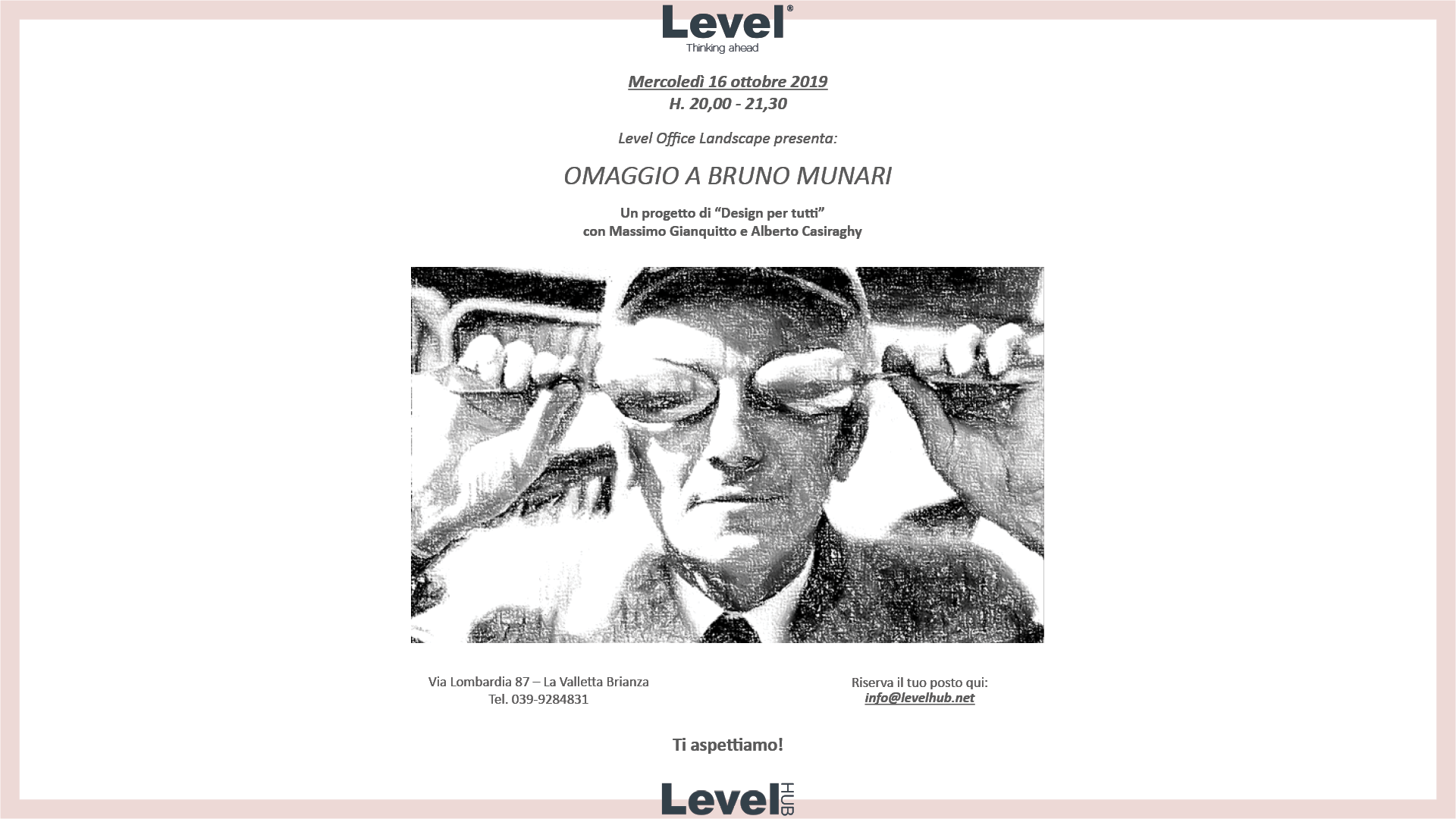 On Wednesday, the 16th of October, LevelHUB will host “Omaggio a Bruno Munari” an event open to the public

After the great success of the “Design Per Tutti” first edition, Level has decided to launch a new event dedicated to Bruno Munari, a designer and artist made famous by teaching an understanding of the design discipline.

With the same format of the previous events held in May; where the design language was taught by various professionals and experts, on the evening of October 16th LevelHUB will once again open its doors to designers, architects, students and anyone who is passionate about learning more of the design language.

The research/networking space in La Valletta Brianza will once again host this Design Gathering with a focus on Bruno Munari, a Master that was able to spread a simple universal message through his design philosophy.

Wednesday October 16th, from 8:00 to 9:30 pm, Level Office Landscape will celebrate his work with a soirée presented by Massimo Gianquitto and Alberto Casiraghy.

As a part of the “Design Per Tutti” project, the networking location will add a touch of design to the event.

The event “Omaggio a Bruno Munari” will be divided into three different parts:

The introduction will be presented by Massimo Gianquitto:

Level Office Landscape’s CEO; an Architect and Professor of the History of Contemporary Art at IED Milano. He has also published many books, the last one focused on Land Art. During the “Omaggio a Bruno Munari” event he will introduce Munari. “Who is Bruno Munari?” – is a question many of you are probably asking: as Massimo explains “He was a philosopher who asked many questions about the world we live in”. “Bruno Munari is remembered as an artist and designer and inventor who was able to convey his ideas in a simple, straight-forward manner by replacing words with images. Through his visual communication, he gave others a chance to take a look into is mind be it the day it was drafted or a hundred years later.”

Alberto Casiraghy is the man who personally met this Master of Design. During the event he will tell his testimony: “My meeting with Bruno Munari”. Gianquitto will interview Casiraghy, author of poetries and founder of Pulcinoelefante publishing house in 1982. During his life he has met many interesting individuals, like the poet Alda Merini. “When Massimo Gianquitto found that I had personally known Bruno Munari, he asked me to attend this event and suddenly we had many ideas. I had the chance to publish some of the Maestro’s books and thanks to the job we developed a strong relationship. I will never forget his quotes like <There are impossible nougats!>”. Learn more during the second edition of the “Design Per Tutti” event held on the 16th of October.

Bruno Munari – A Master of Design

Bruno Munari lived and breathed contemporary design. Born in Milan in 1907, he dead in 1998 at the age of 90 after spreading his art and methodologies: from photography to cinema, painting, sculpture and design. His projects have been exhibited in Milan as well as in New York’s MoMa. He worked to simplify Design and make it easily understandable for everyone. Thanks to his ties and connections to children’s world and their games, he wrote many books and won the Andersen Prize and best children’s author in 1974.

Among his most famous Design projects was the Le Forchette, Falkland a fabric lamp designed for Danese or Cubo, an ashtray of the fifties which rediscovered this geometric volume by opening it. Finally, concavo-convesso, represents a perfect balance between the abstract and the physical worlds. Abitacolo was a fine experimentation conducted in 1971, winner of a Compasso d’Oro Prize and today produced by Rexite. It will be presented inside LevelHUB during the event on October 16th.

“Omaggio a Bruno Munari”, the workshop

“Omaggio a Bruno Munari” will end with a workshop for all those attending. “Sculture da viaggio” will mimic the Maestro’s designs and let people take part in making sculptures with paper and typos.

Send an email to info@levelhub.net

« Beyond the Office: Work Inside Hotels
The Office Desk: 5 Ways to Use It »

Level Office Landscape's staff is available to support you and design your safe office, able to preserve workers' health.

Contact us here +39 039 9284831 or e-mail us at commerciale@levelofficelandscape.com to develop your tailor-made project.